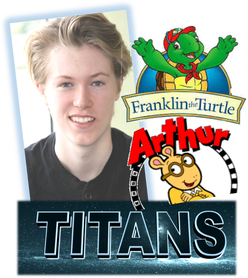 William Healy performed two seasons starring as the voice of Arthur in the cartoon series Arthur and he was also the starring voice of Franklin the Turtle. As such, William has learned so much of what it takes to be a professional voice star and be consistent in turning out episode, after episode, after episode of exceptional work to an audience of Arthur and Franklin fans worldwide.

William's cartoon voice course runs for 90 minutes for 8 weeks. Total of 12 hours. Students will learn how to warm-up their voices, breakdown a scene and use their voices for cartoons and video games, how to bring expression to their voices and their characters and make the work fun. Students also learn how to discover finding your unique voices, working with text alone, then with support images and then using voice over with video.  Defining and exploring cartoon multiple character voices, including voice syncing to video cartoons.
Students also work with actual scripts and learn proper etiquette when working in a professional recording studio.

When students finish their course with William they will have a viable credit on the actors resume, will have developed some cartoon voices ready to try out on actual auditions, learned about script work, voice overs, working in a professional studio and will have a greater confidence in themselves and their work. William will also discuss about the voice industry, voice auditions and dealing with the reality of getting a starring role in voice.

Students work will be recorded for them to share with family.

This course is for beginners to advanced and material will be giving based on experience.

Only 6 students in the class means more quality time.

Location is 8220 Bayview Ave, Suit 201 Thornhill, ON L2T 2S2 upstairs on the second floor inside the Sylvan Learning center.